Funny wedding anniversary quotes can be a delightfully humorous way to acknowledge and celebrate your anniversary. After all, marriage is hard, funny, and sometimes unthinkable (i.e. you probably know way too much about his bodily functions)

Use these funny and relatable quotes and anniversary wishes as text messages, Facebook status or any way you’d like – to have a good laugh together on this special day. 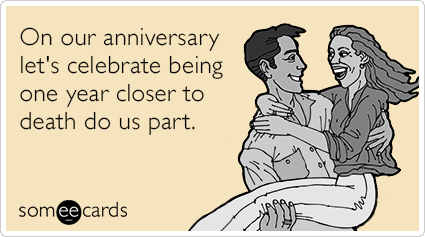 Below you’ll find clever and funny quotes, words, and wishes you can text, message or post on social media to celebrate your wedding anniversary and your marriage.

👉 Let’s start with some general observations about marital “bliss”:

In my house I’m the boss, my wife is just the decision maker.

A marriage anniversary is the celebration of love, trust, partnership, tolerance, and tenacity. The order varies for any given year.

For Marriage to Be a Success, Every Woman and Every Man Should Have Her and His Own Bathroom. The End.

If two people love each other, nothing is impossible. Except deciding where to eat.

When someone is murdered, the police investigate the spouse first. That tells you everything you need to know about marriage.

Still Looking for an Anniversary Gift? 😉

If you want to sacrifice the admiration of many men for the criticism of one, go ahead… get married. If you first don’t succeed, try doing it the way your wife told you.

Marriage is just texting each other – “do we need anything from the grocery store?” – until one of you dies.

Wedding anniversaries are a time when men pause and reflect on what it was they did before they were married: anything they wanted to. I think men who have a pierced ear are better prepared for marriage. They’ve experienced pain and bought jewelry.

Marriage is basically just whispering, “Are you awake? I need to show you this cat video.

Marriage has no guarantees. If that’s what you’re looking for, go live with a car battery. An archaeologist is best husband a woman can have: the older she gets, the more interested he is in her.

Husbands are the best people to share a secret with because they never listen anyway.

Behind every great man – there’s a woman rolling her eyes.

Unless you want to forget about your marriage, it’s a good idea to remember your anniversary. 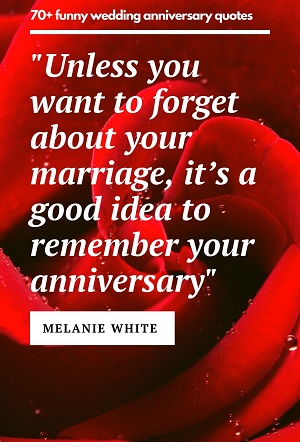 Drug stores understand life. That’s why the anniversary cards and sympathy cards are right next to each other.

I was married by a judge. I should have asked for a jury.

Some people ask the secret of our long marriage. We take time to go to a restaurant two times a week. A little candlelight, dinner, soft music and dancing… she goes Tuesdays, I go Fridays.

Whatever you may look like, marry a man your own age – as your beauty fades, so will his eyesight.

Marriage: when dating goes too far.

Marrying a man is like buying something you’ve been admiring for a long time in a shop window. You may love it when you get it home, but it doesn’t always go with everything else.

I never knew what real happiness was until I got married; by then it was too late.

I love you more than coffee, but please don’t make me prove it.

The four most important words in any marriage: I’ll do the dishes.

Marriage is the only kind of fire which is never covered by insurance. 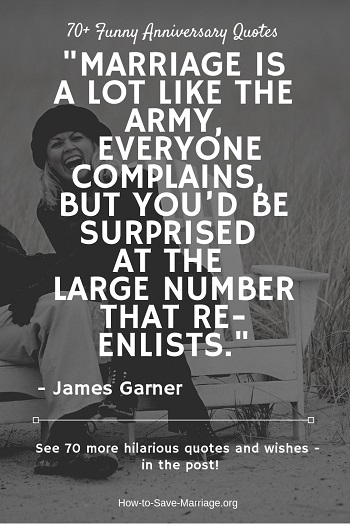 Marriage is a lot like the army, everyone complains, but you’d be surprised at the large number that re-enlists.

Love is blind but marriage is a real eye-opener

If we take matrimony at its lowest, we regard it as a sort of friendship recognized by the police. 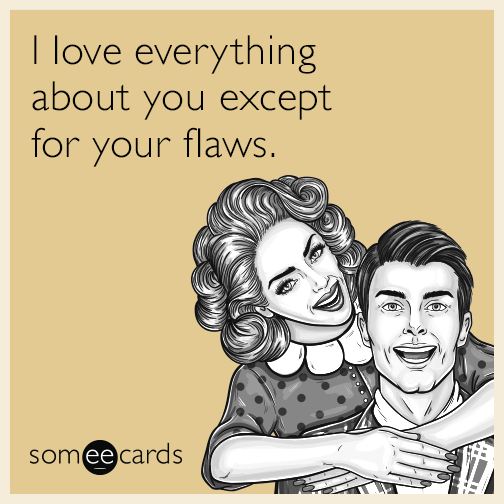 Here are some super funny anniversary wishes you can text your husband or post on your Facebook status:

1. “Happy Anniversary to the best first husband I’ll ever have.”

2. “A wedding band is the smallest handcuff ever made, I’m glad I chose my cellmate wisely.”

4. “And here I thought you were just a one-night stand. Happy anniversary!”- Pauline Thomason

6. “Well, we made it another year without one of us either ending up dead or in jail.”

7. “Happy anniversary! Just imagine if our marriage was functional as you make it appear on Facebook.”

8. “I love you. You annoy me more than I ever thought possible. But I want to spend every irritating minute with you.”

9. “On our anniversary, I want you to know how much I’ve enjoyed annoying you all this time and how excited I am to keep doing it in the future.”

10. “I’m so privileged that you chose me to be that special woman in your life who will forever have the honor of picking up your socks and washing your underwear.”

11. “I vow to still grab your butt when you’re old and wrinkly.”

13. “Happy Anniversary! Now if I can just remember your birthday this year.”

15. “I hope you keep grabbing my butt every time you look for the remote.” 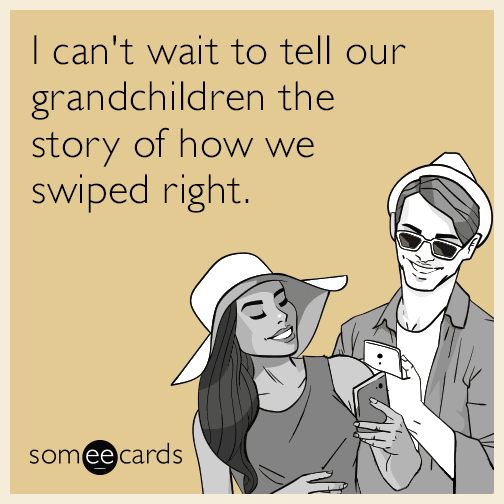 16. “I fall in love with you each and every day. Except for yesterday. Yesterday you were really annoying.”

17. “All I want for next year is you. Just kidding, give me diamonds.”

19. You have me, so I don’t know what else you could wish for. But knock yourself out.”

20. “Never laugh at your wife’s choices you are one of them.”

21. “One year down, freaking forever to go. Happy anniversary.”

22. “Happy anniversary! We’ve been through a lot and most of it was your fault.”

24. “I love you. Thanks for killing all the spiders this year.”

25. “Thanks for being my unpaid therapist.”

26. “Being married to you is like having a best friend who never listens to what you say.”

27. “I know you appreciate the fact that before we were married you didn’t know there was a wrong way to put the milk back to the fridge.”

28. “Happy anniversary my love. Eat all the leftovers again and I will end you.”

29. “I love you so much I’d take a bullet for you. Not on the head…but maybe like…the leg”

30. “I love you more than carbs but less than cheese!”

32. Happy anniversary day from the best thing that ever happened to you.”

And now, a few funny marriage quotes for those of us married for 10 years or more:

1. “Let’s do the one thing I really like to do in the bedroom. Vacuuming.”

3. “Overall, I love you more than I want to strangle you.”

5. “After all this time, my love for you is still stronger than my desire to be single.”

7. “There’s no one else I would rather snoring as hell beside me.”

8. “Let’s keep making memory after memory together; even though you’re losing yours.”

9. “Happy anniversary! I want to spend the rest of my money with you.”

11. “Happy anniversary to my husband, who still looks at me the way he looks at other women.”

12. “Congratulations on choosing a spouse who makes you look sane.”

13. “Let’s never give up on trying to change each other.”

Funny Anniversary Gifts (for Him)

For the couples who appreciate marriage humor, here’s a great list of funny anniversary gifts – that will crack him up and bring laughter into your home on this special day: 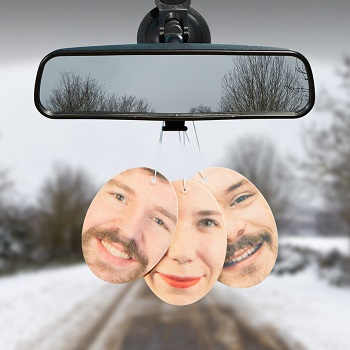 Can’t go on that road trip with him? no problem. He won’t forget about you or how you always smell so good with the Fresh Face personalized car air freshener set. Pillowcase with your face on it – $27 at Firefox

This super-soft pillowcase takes cuddling to a whole different level, with your face repeated on it over and over, so he won’t say he can’t get enough if you – anymore. Just because you love to cook together with him, doesn’t mean he can forget who is right. This 2-piece embroidered apron set is well made and with beautiful printing.

Romantic Anniversary Gifts for Him Your names and wedding date carved into a tree trunk in a beautiful art canvas – see it on gifts.com His charging station and jewelry box – beautiful and useful gift – see it on gifts.com

I hope you had a good laugh with these quotes and words, and most of all I wish you both a happy anniversary and many more years of laughing, crying, fighting and loving one another – unconditionally.