I honestly don’t know what prompted me to pick up my husband’s cell phone and look through his texts while he was in the shower.
It was about 4 years ago. He came home late at night after a “meeting with co-workers” and quickly ran into the shower.

I’m not the suspicious type, and I had no real reason to mistrust him. I always thought of him as a dependable, loyal and loving husband.

As I scrolled down his messages, I smiled to my self, feeling relieved. Mundane work messages along with texts from me and some of his friends.

And then my stomach lurched. I have found a few text messages from a female co-worker whom I never heard about, each of them ending with a string of kisses.

“We must stay in each other’s life”, read one of them. “I can’t wait to see you tomorrow”, read another.

My husband and best friend replied in the same manner.

I was shocked beyond belief. I felt the floor slipping from under my feet and I had to sit down because I was so dizzy.

This is how I found out about my husband’s emotional affair (and how I came about writing this blog).

Dealing With the Pain and Jealousy Caused by His Affair

Like all emotional (or physical) cheaters, my husband denied his affair. But I was in a rage and felt I had to find out more.

I was consumed with jealousy, anxiety, depression, and anger – all at once. I felt incredibly deceived.

I started doing things I never dreamed I would do.

I snooped around everywhere. I looked at her Facebook profile (and found out she was only 22 and quite attractive), I accessed phone records and credit card bills.

👉 When I gathered all the evidence I confronted him again.

This time he confessed he “has feelings for her”, but swore he never slept with her.

I suddenly felt old, tired, and worthless. And betrayed beyond belief.

I accused him of destroying our marriage and our family.

Maybe they haven’t made love (I’ll never know for sure), but it is still a huge betrayal.

The next months felt like my whole life was paused. I spent every waking moment obsessing about the secret dinners, intimate texts and conversations, and late-night meetings.

I had no idea how to cope with my husband’s emotional affair. And I couldn’t get out of the vicious cycle of pain, anger, and mistrust – until I found this free marriage help (more on that below).

In a 2015 survey, 88% of women said that they cared more about emotional infidelity than physical infidelity. That’s 2x higher than men when asked the same question.

What is Considered Emotional Cheating?

Emotional cheating is when you or your spouse get so close to another person that it starts interfering with your/his investment in the relationship. The emotional cheater focuses more on his connection with another woman (including texting, calls, and meetings) than on his existing relationship.

Why Do Men Emotionally Cheat? 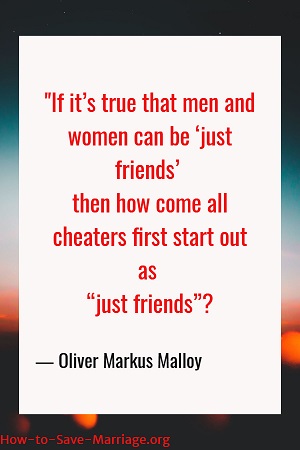 You’ve discovered personal emails. Too personal. Or a series of late-night calls. Your husband has admitted it or hasn’t – it doesn’t matter. Your gut tells you the truth.

How did he meet this woman? Who is she? What does she look like? Did they sleep together? Did he plan to leave and our children for her?

You have to realize that your husband DID NOT PLAN THIS.

A completely innocent after-work meeting with co-workers can result in two people being excited about a mutual project.

They end up spending a lot of time together. More time than with their spouse. The relationship becomes increasingly comfortable and your husband loves the attention of another woman.

It quickly spirals out of control and they start texting each other personal and intimate texts throughout the day.

The conversation shifts from business to life outside of work. They go to late-night dinners and he shared personal details of his marriage with her.

Their communication defines their relationship as special and separate from their respective marriages.

This is how my husband’s emotional affair began.

(And I’m sure, in the back of my mind, that if I hadn’t caught it in time, it would have naturally evolved into a physical affair as well.)

Your husband did not plan it, and his emotional cheating started innocently. He didn’t realize that this emotional attachment has threatened the very foundation of your marriage.

See the 4 stages of emotional affairs and how his friendship turned into an affair.

Why He Denies and Refuses to Let Go

(Before you confront him, check the 8 signs of emotional cheating in a marriage)

Your husband, like any other emotionally unfaithful man, is addicted.

An emotional cheater becomes dependent on the other woman for emotional highs. They’re loving the flirting, the sympathetic ear, and the excitement of feeling special again.

He will tell you to stop being too insecure. To stop being jealous. That there’s nothing wrong with having friends from the opposite sex.

They don’t want to realize how destructive their emotional attachment is to your marriage.

👉 Read: should you confront the other woman?

How to Get Over His Emotional Affair

In the many years I’ve been writing this blog I have seen the destruction caused by emotional affairs – time after time.

The trust that’s so hard to restore. The feelings of low self-esteem, the constant suspicion, the accusations, the heartache, the constant anxiety – the marriage seems to be hanging on a thin thread.

But I’m here to tell you that it’s up to you. You can decide that this is not how your story ends.

If you get the right kind of help, you’ll be able to overcome this crisis and come out with a better marriage at the end.

If you want to know how to finally overcome your husband’s affair, sort through your emotions, learn how to trust him again and how to prevent this from ever happening again – You’ll have to know the exact right steps to take and at what order.

You don’t have to stay stuck.

Don’t try to do it on your own. There’s no time for trial and error. Saving your marriage has to start now.

I am living proof – it CAN be done.