Many women get confused about emotional affair signs. Is it just a close and warm friendship or actual cheating?

I’m here to try and help remove the confusion.

An emotional affair can be the beginning of the death of a marriage, and some say it’s much worse than a physical affair.

When your husband finds intimacy and an emotional connection with another woman, the physical aspect is not far behind, and the slippery road to divorce begins.

But how can you know for sure if your spouse has a crush on another woman? Here are the most alarming telltales that your husband is in love with another woman:

8 Emotional Affair Signs (Does He Have a Crush on Another Woman?)

Marriage is built on an emotional connection between two people.

When one partner goes outside of marriage to seek fulfillment, whether that fulfillment is sexual or emotional in nature – that is cheating.

Here are the most common emotional affair signs:

1. If your husband has a deep personal relationship with some intensity (with another woman), the relationship has probably crossed over to an emotional affair.

2. If he makes excuses to be with her. For example, he goes out of his way to work on the same project his co-worker works on or justifies his time with her by having to help her because she is in trouble (very common)

For example, he shares his marriage problems (which we all have) – with her. That’s the worst.

4. Hiding the extent of the “side” relationship – If he is secretive about his “friendship” and hiding text messages and his cell phone – it means he has something to hide.

5. Getting angry and defensive when asked about the other woman – when you ask him about these little signs – does he get angry and try to blame you for snooping instead of answering your question?

If the answer is yes – it means he is feeling guilty and trying to hide the truth shift the attention to you.

Generally, the response from the person who has been “caught” is to argue, “What, you mean I can’t have a friend of the opposite sex?”

👉 See exactly how to cope with your husband’s emotional affair

6. He doesn’t share his problems with you. If he never has, it’s less suspicious. But if he used to share his struggles with you and now he doesn’t, plus he has a female friend, he is probably sharing them with her.

7. He texts her frequently. It’s especially alarming if he texts her “good morning”, or “good night” – without anything else.

8. He is not interested in sex (because he fantasizes about her), or is more interested than ever (because he is more sexually aroused by the excitement of having a crush on someone else).

I know how painful it is for you to find out even one of these emotional infidelity signs. It feels like a stab in the heart would feel and it makes you feel like the rug is being pulled under your feet.

See the best free resource for dealing with infidelity and fixing your marriage – by marriage counselor Mort Fertel.

It is not difficult to detect emotional cheating when you have access to his texts. If he hides or tries to delete texts from another woman, that’s the biggest red flag, no matter the content of the texts.

Why Do Men Have Emotional Affairs? 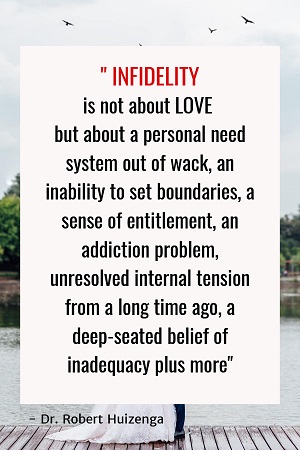 Generally, any man or woman having an emotional affair starts with fulfilling some aspect of friendship that is lacking in the marriage. These aspects of friendship can include laughing together, talking about work challenges or other common issues they have, harmless flirting (at first), and so on.

The thing about friendships where your spouse becomes emotionally invested in someone else is that he can slowly detach from his actual partner. It doesn’t matter if it’s just a Facebook friend, a co-worker, a neighbor, or an old flame (those are most dangerous, especially if there was no good closure when it ended).

Emotional affairs can easily escalate to sexual ones, no matter how much you or your spouse would want to avoid it, and no matter how committed he is to your marriage and family.

The 4 Stages of Emotional Affairs

Here’s how a harmless friendship can lead to emotional dependency and a hazard to any marriage:

“She’s just a friend”, he’ll tell you when you start to get suspicious, and at the beginning that’s all she was.

She’s just a colleague at work, an old friend from college, anyone really. They started out just talking about mutual interests, some of them you may not find very fascinating yourself.

Then they meet for a coffee, graduate to lunch and then the phone conversations or the texting begins.

This is very exciting for a marriage partner that’s stuck in a relationship rut (like most of us), a relationship that is no longer as exciting and fulfilling as it used to be.

Suddenly he realizes that he really likes talking to her, texting her, and listening to what she has to say about things.

Her ability to be patient, understanding, and interested in what he has to say – makes him feel important and boosts his self-esteem and ego greatly.

He begins to flirt, subtly, gives her compliments and praises, and starts feeling attracted to her. He feels excited when he communicated with her – online or in person.

He feels a bit guilty about this, so he tags this outside relationship as a friendship, and justifies it to himself this way.

👉 See the effective ways to make him stop cheating 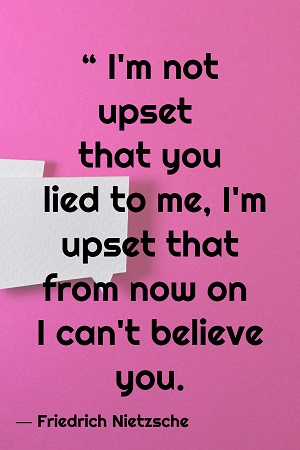 When he starts feeling guilty about wanting to meet her alone, talk to her often, and flirt with her – the secrecy and lies begin.

He starts thinking about how you would feel if you knew about the depth of his “friendship” and while it doesn’t make him stop, it does make him start lying about it.

When you ask him about her, he gets angry and defensive, because he knows he is about to get “caught” and that would force him to stop the emotional intimacy he has with the other woman.

At this stage, he will not end his relationship with her, even though he is going through a marital crisis after you found out about it and fought with him over it.

This is because he became addicted to this relationship. He is not addicted to the person, by the way, he is dependent on the way this new and exciting thing makes him feel about himself.

At this point he is almost ignoring you and your marriage (sometimes even the kids), he spends most of his free time talking to her or finding ways to see her, putting an effort at being attractive and he is completely dependent on her for emotional fulfillment.

This goes with sexual fantasies about her as well.

👉 Read: should you confront the other woman?

What to Do When Your Husband is Talking to Another Woman

Let me start with what NOT to do first.

1. Do not confront him and accuse him of having an emotional affair before you have proof. You’ll only hear lies and he will run out of the house to get his story straight. If you must confront him, confront your husband – the smart way.

2. I know how excruciating it is, but don’t let your anger, humiliation, and heartbreak stop you from thinking straight.

First, decide if your marriage is worth saving, and only then take the next steps.

3. You may find it hard to believe, but there are effective ways to make him stop cheating before it’s too late.

The most important message I want to get through to you is that even if you found signs of an emotional affair, it doesn’t mean that your marriage is over.

It means that your marriage is in trouble, and you have to take immediate steps to prevent getting to the point of no return.

Your husband still loves you, but his emotions are stuck under years of unaddressed communication problems, which are the most common cause of marital problems.

👉 This can be fixed and reversed, and I highly recommend that you use this free resource to get you started – today.